IN THE LAND OF THE PODS STORY

IN THE LAND OF THE PODS. The Pods all lived on a beutifull island in the sun. The island was full of trees, flower, birds, butterflies, and many other harmless creatures, all living happily together. There was enough foot to eat, lovely beaches for swimming and plenty of enjoyable things to do.

You would have thought, in such a place, that the Pods were very satisfied with their life.
But no! They were not!

Unfortunately, the Pods were not all the same. Although they all had the usual seven fingers on each hand, half of the Pods had a very l-o-n-g middle fingger, while half of them did not. This was the couse of a lot of trouble.

For instance, when Johnny Pod wanted to go out and play podball with his friend Peter Pod, his mother called to him:

"Johnny! Come back here! You're not going to play with a short-fingered Pod. They're not like us. They are lazy, stupid and dirty. I forbid it!"

The short-fingered Pods felt very sad that their long-fingered relations looked down on them. They walked around sadly, trying to hide their hands, and only felt happy when they visited each other.

As time went on, frienship between the two types of Pods became impossible. The long-fingered Pods would have nothing to do with the short-fingered Pods, and even built their own village on the other side of the island. They put up a large white sign outside the village which read: 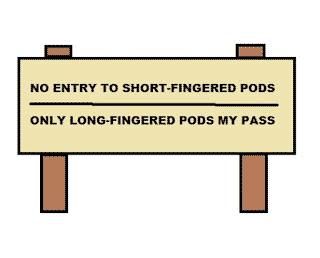 The short-fingered Pods the were furious. They quickly began to prepare an army to attack the other village. Everyone was busy and excited, sharpening swords, cutting sticks and collecting stones.

Everyone looked out to the sea, and there, sailing gently towards the beach, was a little boat with a strange man and an even stranger machine in it. The man jumped ashore, and pulled his boat up the beach.

"Friends!" he shouted. Gather round! I have brought you the answer to all your problems. This is my Finger-Stretcher! For only five dollars, this machine will stretch your fingers and make you the same as the long-fingered Pods!